This week we were inspired by Dylan Thomas’ Fern Hill and Wordsworth’s Daffodils, with help from Ruth Bitowski.

Both poems are below.

First in was Alison’s cheery daffodil (below), followed by Trish’s Fern Hill fox and daffodils (below).

Anne’s flowers, all with their heads held high and looking to the sun (above) and Mavis’s field of flowers ‘fluttering and dancing in the breeze’ (above right) and Chrissie’s delicate flower in a field of yellow. 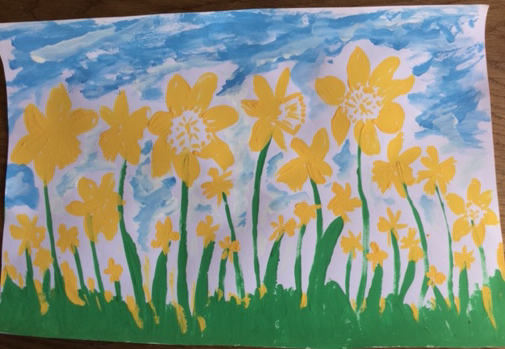 Now as I was young and easy under the apple boughs 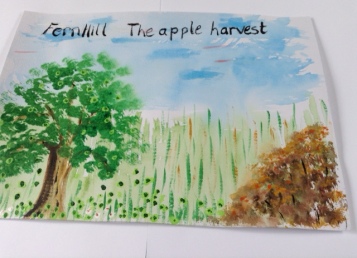 About the lilting house

and happy as the grass was green,

The night above the dingle starry,

Time let me hail and climb

Golden in the heydays of his eyes,

And honoured among wagons I was prince of the apple towns

Trail with daisies and barley

Down the rivers of the windfall light.

And as I was green and carefree, famous among the barns

About the happy yard and singing as the farm was home,

In the sun that is young once only,

Time let me play and be

Golden in the mercy of his means,

And green and golden I was huntsman and herdsman, the calves

Sang to my horn, the foxes on the hills barked clear and cold,

And the sabbath rang slowly

In the pebbles of the holy streams.

I wandered lonely as a cloud

That floats on high o’er vales and hills,

When all at once I saw a crowd,

A host, of golden daffodils;

Beside the lake, beneath the trees,

Fluttering and dancing in the breeze.

Continuous as the stars that shine

And twinkle on the milky way,

They stretched in never-ending line

Along the margin of a bay:

Ten thousand saw I at a glance,

Tossing their heads in sprightly dance.

The waves beside them danced; but they

Out-did the sparkling waves in glee:

A poet could not but be gay,

In such a jocund company:

What wealth the show to me had brought:

For oft, when on my couch I lie

In vacant or in pensive mood,

They flash upon that inward eye

Which is the bliss of solitude;

And then my heart with pleasure fills,

And dances with the daffodils.